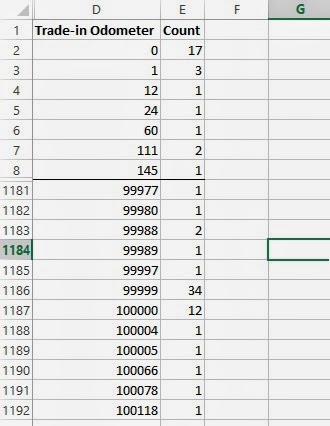 I can't answer that, but introducing a second variable can still be instructive.
I've examined the full data set for several states and found that the 99,999 and 100,000-mile odometer readings tend to cluster with just a few dealerships. We still don't know if it's fraud or sloppy, but I can see who did it.
I won't name dealerships here, but you can get the full dataset (it's public data) and do your own analysis.
Posted by Tom Groleau at 9:30 AM