With both the "great resignation" and inflation in the news, I decided that it was time to look at the US minimum wage. I've put my findings in a single chart. 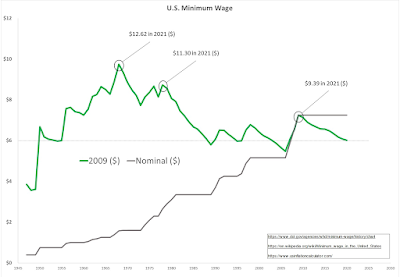 Since the minimum wage was last raised in 2009, I converted all values to 2009 dollars. To my eye, a couple of things stand out.
Since we are approaching the historical floor, I think that one can make a fairly strong argument in favor of increasing the federal minimum wage.
The bigger question is how far it should be raised. The data gives us three points to consider.
Combining those, one could reasonably argue for a new minimum wage anywhere between $9.40 and $12.65.
Disclaimers: I am well aware that many historical "minimum wage" jobs now pay more than minimum wage. I will let others argue about whether that is due to labor supply/demand or political pressure. My analysis is based on nothing more than the data. It is not an analysis of human value.
However, I'll make one political statement. It would be a great bipartisan move to increase the minimum wage. Sure, the argument about the exact figure could get ugly, but our political leaders could also decide to act like grown-ups, look at the data, find a compromise number, and show the country that they can work together. It could be done quickly.
Sources: