Qualitative Data is Data Too (Part 3)

Once upon a time, Council Bluffs Iowa was a major stopping point for westward travelers due to the presence of a steam powered boat to ferry wagons and livestock over the Missouri River. Then someone decided that a transcontinental railroad would be a good idea. Wagon trains were fine, but railroads would be faster and more efficient for people, products, and livestock.

The big question: where would it go?

Several broad routes were considered and a "central" route was selected. Within the central route, an eastern starting point had to be selected. As POTUS, Abraham Lincoln would make the decision.

Just imagine the economic loss for Council Bluffs if Kansas City Missouri were selected as the starting point. Council Bluffs would have turned into a ghost town.

As luck would have it, one of the investors had previously employed Lincoln as an attorney and this investor wanted Council Bluffs selected. There's no way to be certain, but it would be reasonable to conclude that his connection to Lincoln influenced the decision. Council Bluffs was selected and by the 1930's its status as a wagon train stopping point was replaced by its status as the 5th largest rail center in the US.

The invention of the automobile again changed the nature of transportation and Route 66 was established in 1926. When completed it ran from Chicago to Santa Monica and became one of the most famous highways in US history. By 1930, trucks rivaled rail for dominance in shipping.

Route 66 was a financial boon for towns and businesses along the route but, like many highways, its path wasn't static. 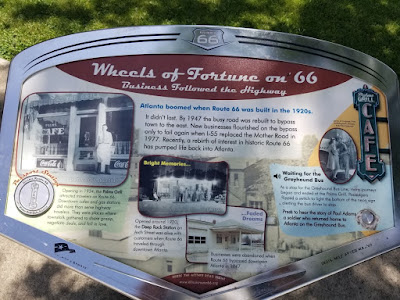 In New Mexico, an angry Governor used his lame-duck power to move Route 66 and bypass the state capital: "In 1924, Democrat Arthur Thomas Hannett was unexpectedly elected for a single term (1925–1927) as governor, only to be defeated with various dirty tricks in the next election. Blaming the Republican establishment in Santa Fe for his defeat, Hannett used the lame duck remainder of his term to force through a sixty-nine mile cutoff from Santa Rosa directly to Albuquerque, bypassing Santa Fe entirely."

These are just a few of many examples of Route 66 changes over the years. Most were not as blatantly political as in New Mexico, but each change still had politics in the background. Whether they were elected or appointed, someone or some group made the decision.

Just as rail usurped wagons and highways usurped rail, interstates began usurping highways in the 1950s. Portions of these interstates (I55, I44, I40) follow Route 66 very closely but most of Route 66 was bypassed. Much of the current Route 66 nostalgia focuses on the economic impact of the interstates and how they created a new generation of ghost towns.

This might not look like "data". Maybe you think it's just a story, a narrative of changing modes of transportation (admittedly a very abbreviated narrative). However, I would argue that there's a discernible pattern here and that we can derive insights from that pattern.

2) When things change, politics matters. This is actually the main point, but I used #1 to emphasize the inevitability of change. Changes in transportation required political decisions about routes and right-of-ways. Changes in retail required political decisions about zoning, building codes, and taxation. If you plan to be in business, then you need to understand politics. Study politics. Study political economy. Read Travels of a T-shirt and pay attention to the policy and regulatory decisions made by a myriad of political bodies.

3) Nostalgia is selective. This is a minor point, but I still find it interesting. Route 66 is "hot" at the moment. Perhaps it's because of Disney's Cars or maybe it's relative to age of the Baby Boomers. Either way, there are books, blogs, articles, etc. about the sad loss of prosperity on Route 66. I don't see this level of concern over the ghost towns created when wagon trains disappeared. More recently, Lena Wisconsin's downtown was bypassed by reconstruction of Highway 141. Maybe the locals talk about the impact on Lena's downtown, but there's no national discussion that I've ever heard about.